COLUMBIA, Md., Dec. 14, 2022 /PRNewswire/ -- The Howard Hughes Corporation® (NYSE: HHC) has broken ground on a four-story, $45.8 million medical office building in the Lakefront District in Downtown Columbia®, Maryland, signifying the next phase in the revitalization of the city's urban core. The groundbreaking marks the first major milestone in HHC's rejuvenation of the Lakefront District, which is poised to serve as the heart of the transformative $5 billion, 30-year plan for Downtown Columbia. Future development planned for the Lakefront District also includes two new community parks, three new residential buildings, and a wide variety of retail offerings. 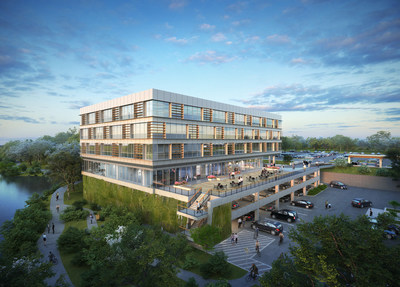 The four-story, 86,000-square-foot medical office building will rise along the south shore of Lake Kittamaqundi at 10285 Little Patuxent Parkway, adjacent to the iconic former headquarters of The Rouse Company, now the home of Whole Foods. The striking new building is set in a picturesque, wooded landscape and will feature outdoor gathering spaces, a permanent public art installation, and a boardwalk-style public terrace offering expansive lake views.

"This state-of-the-art medical office building will be a significant addition to Downtown Columbia and the Lakefront District," said Greg Fitchitt, President, Columbia Region at The Howard Hughes Corporation. "As we welcome notable partners including the Orthopaedic Associates of Central Maryland, we continue to see the vision for the rejuvenation of the Lakefront District take hold and deliver a community anchor for all who will live, work and shop in the area."

Orthopaedic Associates of Central Maryland will occupy 25 percent of the new building, joining the growing list of Lakefront District tenants including The 3rd, a recently opened non-profit incubator space and café supporting women-of-color entrepreneurs, and the locally-owned unique dining and entertainment concept The Collective, which will open this winter. In contrast with larger national trends showing a decline in tenant leasing and profitability since the onset of the pandemic, Downtown Columbia's retail market has continued to experience strong momentum. In 2023, HHC will welcome over a dozen new restaurants and retailers to Downtown Columbia including Bark Social, Toastique, Banditos, Medium Rare, Blackwall Barn & Lodge, Mighty Quinn's Barbeque, Smashing Grapes, Jrip Coffee & Croissanterie, and Gyusan.

Columbia, MD, was founded by James Rouse as a "city in a garden," a vibrant urban destination surrounded by expansive green open space. The Howard Hughes Corporation's plans for the medical office building and surrounding area are designed to further enhance inclusivity and connectivity, reflecting Rouse's early vision for the Lakefront District as a community gathering space. Rouse commissioned the Frank Gehry-designed Rouse headquarters building in 1969, envisioning it as the future center of the city. For this project, HHC has worked with Studio Red Architects to complement Gehry's architecture in alignment with preservation guidelines.

HHC's development plans for the Lakefront District include up to 3 million square feet of overall redevelopment—1.3 million square feet of office, 281,000 square feet of retail and 1,284 residential units. The groundbreaking follows the recent completion of Marlow, a premier 510,000-square-foot, 472-unit apartment community in the heart of the Merriweather District®. Marlow will be anchored by Smashing Grapes, a favorite Maryland restaurant offering a fusion of Mediterranean and California coastal cuisines paired with world-class wines.

The new medical office building is expected to open in 2024.

A development of The Howard Hughes Corporation®, Downtown Columbia is located at the center of Columbia, MD, one of the first master planned communities in the U.S. founded by legendary developer James W. Rouse in 1967. Conveniently located between Washington, D.C., and Baltimore, Columbia comprises 14,000 acres including ten completed residential villages and a deep pipeline of commercial development opportunities within its downtown. At full buildout, the redeveloped 391 acres of Downtown Columbia will include three new and reconfigured neighborhoods—the Merriweather District®, Lakefront District and Central District—featuring more than 14 million square feet of residential, office, hotel, retail, cultural, and public uses including public parks, trails and more. For more information about the redevelopment of Downtown Columbia please visit www.howardhughes.com/maryland.

About The Howard Hughes Corporation®

The Howard Hughes Corporation owns, manages and develops commercial, residential and mixed-use real estate throughout the U.S. Its award-winning assets include the country's preeminent portfolio of master planned cities and communities, as well as operating properties and development opportunities including: the Seaport in New York City; Downtown Columbia®, Maryland; The Woodlands®, The Woodlands Hills®, and Bridgeland® in the Greater Houston, Texas area; Summerlin®, Las Vegas; Ward Village® in Honolulu, Hawai'i; and Teravalis™ in the Greater Phoenix, Arizona area. The Howard Hughes Corporation's portfolio is strategically positioned to meet and accelerate development based on market demand, resulting in one of the strongest real estate platforms in the country. Dedicated to innovative place making, the company is recognized for its ongoing commitment to design excellence and to the cultural life of its communities. The Howard Hughes Corporation is traded on the New York Stock Exchange as HHC.

Statements made in this press release that are not historical facts, including statements accompanied by words such as "will," "believe," "expect," "enables," "realize," "plan," "intend," "assume," "transform" and other words of similar expression, are forward-looking statements within the meaning of the Private Securities Litigation Reform Act of 1995. These statements are based on management's expectations, estimates, assumptions, and projections as of the date of this release and are not guarantees of future performance. Actual results may differ materially from those expressed or implied in these statements. Factors that could cause actual results to differ materially are set forth as risk factors in The Howard Hughes Corporation's filings with the Securities and Exchange Commission, including its Quarterly and Annual Reports. The Howard Hughes Corporation cautions you not to place undue reliance on the forward-looking statements contained in this release. The Howard Hughes Corporation does not undertake any obligation to publicly update or revise any forward-looking statements to reflect future events, information or circumstances that arise after the date of this release. 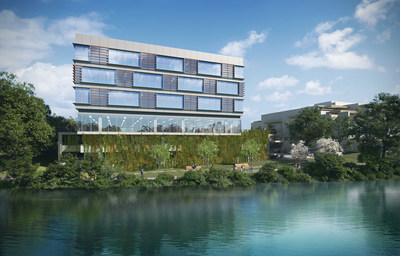