Construction begins on 37,000-acre community to meet demand for housing in one of the country's fastest-growing metro regions

PHOENIX, Oct. 31, 2022 /PRNewswire/ -- The Howard Hughes Corporation® (NYSE: HHC) has broken ground on Teravalis™, a 37,000-acre mixed-use master planned community in the Phoenix West Valley projected to include 100,000 homes and 55 million square feet of commercial development. Teravalis, previously known as Douglas Ranch, will become Arizona's largest master planned community, addressing the demand for housing in one of the country's fastest-growing metro regions and supporting long-term sustainable growth in the Southwest.

"In the game of states, people vote with their feet—and Arizona is winning. Since 2015, Arizona has welcomed over 584,000 new residents and we don't expect that momentum to stop anytime soon," said Arizona Governor Doug Ducey. "This increases the demand for housing opportunities and Howard Hughes is answering that call with this impressive community, providing quality housing options for current and future Arizonans."

"The name Teravalis means 'land of the valley' and this new community, situated between the White Tank and Belmont Mountain ranges, is firmly grounded in deep respect for its Sonoran Desert setting," said Heath Melton, President of the Phoenix Region for The Howard Hughes Corporation. "Teravalis is designed as an authentic extension of the Phoenix West Valley's natural landscape—a place of extraordinary beauty."

Teravalis is strategically positioned in the pathway of Phoenix's significant growth in the West Valley. Phoenix leads the country with 80% population growth in the past 10 years, including 100,000 tech workers and nearly 30,000 students graduating from the state's largest universities each year.

"Teravalis is an eco-friendly, sustainable community which sets the bar high for other cities to model," said Buckeye Mayor Eric Orsborn. "This innovative, smart community is a great asset for Buckeye, the West Valley, Maricopa County and the entire state of Arizona. Teravalis also provides our residents with more options to live, work and raise a family, while complementing the city's goal of maintaining successful long-term growth."

The planned future construction of Interstate 11 will connect Phoenix, Las Vegas, and Southern California, eventually establishing a trade route between Canada and Mexico. The new Interstate is projected to create $30 to $60 billion of economic impact in the region, with Teravalis' location allowing logistics operations to take advantage of strategic supply chain access to and from the West Coast, furthering Arizona's reputation as one of the nation's top economic development performers.

"Today's groundbreaking of Teravalis is an exciting moment for Arizona and for The Howard Hughes Corporation, as we create a new community from the ground up and HHC adds the next chapter to the legacy of the visionary placemakers who founded our communities in Maryland, Texas, Nevada and Hawai'i," said David R. O'Reilly, Chief Executive Officer of The Howard Hughes Corporation. "Teravalis joins these great American communities which offer an exceptional quality of life and will continue to define how we live and thrive for generations to come."

Media assets for Teravalis are available for download here, courtesy of The Howard Hughes Corporation.

About Teravalis™
Encompassing nearly 37,000 acres in the Phoenix West Valley, one of the nation's fastest-growing metro regions, Teravalis is anticipated to become one of the leading master planned communities in the country, with 100,000 homes, 300,000 residents and 55 million square feet of commercial development. Translating to "land of the valley," Teravalis is situated between the White Tank and Belmont Mountain ranges and is committed to preserving the natural beauty of the High Sonoran Desert. Utilizing innovative technology and sustainable planning, Teravalis is designed to meet the ongoing demand for quality housing and commercial real estate in support of Arizona's booming economic growth, featuring unparalleled amenities and wide-open spaces. Teravalis is a community of The Howard Hughes Corporation®, whose national portfolio of award-winning communities are known for providing an exceptional quality of life and opportunities for long-term, sustainable growth. For more information, visit Teravalis.com.

About The Howard Hughes Corporation®
The Howard Hughes Corporation owns, manages and develops commercial, residential and mixed-use real estate throughout the U.S. Its award-winning assets include the country's preeminent portfolio of master planned communities, as well as operating properties and development opportunities including the Seaport in New York City; Downtown Columbia®, Maryland; The Woodlands®, The Woodlands Hills®, and Bridgeland® in the Greater Houston, Texas area; Summerlin®, Las Vegas; Ward Village® in Honolulu, Hawai'i; and Teravalis™ in the Greater Phoenix, Arizona area. The Howard Hughes Corporation's portfolio is strategically positioned to meet and accelerate development based on market demand, resulting in one of the strongest real estate platforms in the country. Dedicated to innovative placemaking, the company is recognized for its ongoing commitment to design excellence and the cultural life of its communities. The Howard Hughes Corporation is traded on the New York Stock Exchange as HHC. For additional information visit howardhughes.com.

Safe Harbor Statement
Statements made in this press release that are not historical facts, including statements accompanied by words such as "will," "believe," "expect," "enables," "realize," "plan," "intend," "assume," "transform" and other words of similar expression, are forward-looking statements within the meaning of the Private Securities Litigation Reform Act of 1995. These statements are based on management's expectations, estimates, assumptions, and projections as of the date of this release and are not guarantees of future performance. Actual results may differ materially from those expressed or implied in these statements. Factors that could cause actual results to differ materially are set forth as risk factors in The Howard Hughes Corporation's filings with the Securities and Exchange Commission, including its Quarterly and Annual Reports. The Howard Hughes Corporation cautions you not to place undue reliance on the forward-looking statements contained in this release. The Howard Hughes Corporation does not undertake any obligation to publicly update or revise any forward-looking statements to reflect future events, information or circumstances that arise after the date of this release. 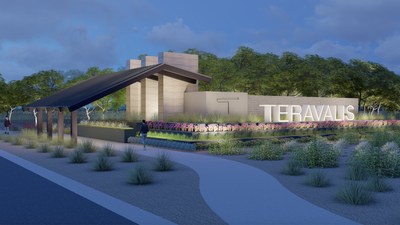