HOUSTON, Feb. 3, 2021 /PRNewswire/ -- The Howard Hughes Corporation (NYSE: HHC) today announced the acceleration of plans for approximately two million square feet of development across the company's portfolio of master planned communities (MPCs). Following strong home sales in 2020 and continued market demand, the company announced plans for new development including an office building and a luxury apartment complex in Downtown Summerlin, a multifamily development in Bridgeland Central, and a new residential building in the Merriweather District in Downtown Columbia, as well as the groundbreaking of the next residential tower at Ward Village. 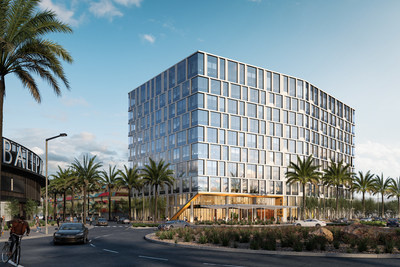 "These new developments are in direct response to the trends we saw accelerate in 2020—a flight to quality, and a focus on health and wellness as people and companies look for walkable, amenity-rich neighborhoods integrated into natural settings with significant open space," said David R. O'Reilly, CEO of The Howard Hughes Corporation. "These developments in our MPCs are a testament to the location, quality and desirability of our communities, as well as the strength of our balance sheet. We continue to focus on accelerating strategic development in our core assets as we closely monitor demand for various product types where we can deploy our capital to achieve outsized risk-adjusted returns for our shareholders."

"We are launching 2021 with a series of strategic, market-driven phases of expansion, executing on our plans for large-scale, mixed-use projects that will enhance multiple walkable urban centers across our portfolio," said L. Jay Cross, President of The Howard Hughes Corporation. "Our development will integrate innovative technology, sustainable design, and state-of-the-art amenities into projects designed to serve as catalysts for continued transformation and growth."

"Our strong occupancy, collections and pace at which we have leased our previous two office buildings—as well as the first Tanager luxury apartment complex—speaks to the increasing demand for Summerlin's high-quality lifestyle in a low-tax, business-friendly environment," said Kevin T. Orrock, President, Summerlin, The Howard Hughes Corporation. "RCLCO has ranked Summerlin the #3 top-selling master planned community in the country for 2020, and our development is in direct response to market demand."

The plans for development in Downtown Summerlin demonstrate Howard Hughes' commitment to health and wellness and embody the active lifestyle for which the Summerlin community is known. Touchless entry and enhanced air filtration will be featured throughout both buildings.

1700 Pavilion and Tanager Echo will be built simultaneously, with construction expected to begin in the second quarter of 2021, and with completion and occupancy projected for the fourth quarter of 2022.

"With the recent success and strong market absorption of Lakeside Row The Residences—our first multifamily property in Bridgeland—Howard Hughes is offering Starling at Bridgeland, set on over 15 acres and conveniently located near top-rated schools and miles of jogging and cycling trails," said Jim Carman, President, Houston Region, The Howard Hughes Corporation.

Health and wellness are a cornerstone of Bridgeland's identity, and Starling at Bridgeland will incorporate extensive fitness features and will be located within walking distance of the award-winning Josey Lake. Bridgeland was recently ranked #9 on RCLCO'S list of the country's top-selling MPCs for 2020 and was the top-selling MPC in Texas.

Starling at Bridgeland is under construction and is expected to be completed by summer 2022.

Downtown Columbia
The seven-story, 510,118-square-foot Marlow will become the second residential product in Downtown Columbia's Merriweather District, solidifying the next phase of growth for a neighborhood which is rapidly becoming a burgeoning destination in Columbia—the "third city" in the Baltimore/Washington, DC corridor.

The announcement of Marlow follows the strong leasing velocity demonstrated by Juniper—the Merriweather District's first residential product—since its delivery in the first quarter of 2020. Marlow will feature 472 residential units and 32,000 square feet of retail at its base, with residents placed in the center of the Merriweather District's walkable neighborhood of offices, shops and restaurants.

"We've been able to create an unmatched new community founded on Jim Rouse's vision for Columbia and we have the entitlements and opportunities in place for continued expansion," said Greg Fitchitt, President, Columbia, The Howard Hughes Corporation. "As we advance forward, we expect Downtown Columbia to be a driving force with the development of future office, retail and multifamily assets backed by historically strong demand."

Marlow is set to break ground this February and is targeting initial occupancy beginning in the fourth quarter of 2022.

Ward Village
Victoria Place, the seventh tower at Ward Village, will break ground later this month, providing the community with a new public park, along with 350 new residential units across 543,471 square feet. Victoria Place is the fastest-selling tower to date in the history of Ward Village, the master planned community that is redefining urban island living on the Hawaiian island of Oahu.

Ward Village's new proposed plans for the next phase of its master planned community include the transformation of concrete and aging industrial space into over 120,000 square feet of parks and 48,000 square feet of open space, plus new park space adjacent to Victoria Place.

"As Ward Village continues to evolve, we are committed to making thoughtful improvements to the neighborhood, enhancing walkability, bikeability and connectivity throughout the community, and delivering positive growth to Honolulu," said Doug Johnstone, President, Hawai'i, The Howard Hughes Corporation.

"Across the Howard Hughes portfolio, we expect the number of residents, employees and consumers in our communities to continue to grow and drive significant demand for commercial offerings and set a strong pace for additional future development," said O'Reilly. "With 50 million square feet of entitlements across 3,370 remaining acres of commercial land, we have significant opportunities to respond to market demand and create developments that define our master planned communities and the cities of tomorrow."

About Summerlin ®
Developed by The Howard Hughes Corporation®, Summerlin began to take shape in 1990 and has ranked in the country's top 10 best-selling master planned communities for nearly two decades. Located along the western rim of the Las Vegas valley, Summerlin encompasses 22,500 acres with approximately 5,500 gross acres still remaining to accommodate future growth, including infrastructure, open space and common areas, all within the master plan. The community is currently home to nearly 100,000 residents who enjoy an unparalleled list of amenities. These include more than 250 neighborhood and village parks, more than 150 completed miles of trails, 26 public and private schools, 14 houses of worship, ten golf courses, shopping centers, medical and cultural facilities, business parks and dozens of actively selling floor plans. Homes are available in a variety of styles—from single-family homes to townhomes—with offerings in a wide price range, including custom homesites in The Ridges. Summerlin is recognized as one of the country's premier locations to raise a family and to operate a business, named MPC of the Year for 2020 by the National Home Builders Association.

About Bridgeland®
Bridgeland is an 11,400-acre master planned community located in Cypress, Texas and is ranked as the top-selling master planned community in Texas and #9 in the nation. The award-winning development opened in 2006 and offers a wide variety of housing options and extensive outdoor amenities, with a strong emphasis on conserving and enhancing the natural environment. Bridgeland has over 3,000 acres dedicated to lakes, trails and parks, and offers resort-style pools, disc-golf course, stocked lakes and complimentary use of kayaks, paddle boats and other recreational equipment for residents. Lakeland Village Center® is the first of four retail centers in Bridgeland, with additional plans for Bridgeland Central, a 900-acre future town center, along Grand Parkway, which intersects the community. Bridgeland is a development of  The Howard Hughes Corporation® .

About Downtown Columbia ®
A development of The Howard Hughes Corporation®, Downtown Columbia is located at the center of Columbia, MD, one of the first master planned communities in the U.S. founded by legendary developer James W. Rouse in 1967. Conveniently located between Washington, DC and Baltimore, Columbia is comprised of 14,000 acres including ten completed residential villages and a deep pipeline of commercial development opportunities within its Downtown. The underdeveloped core of Columbia became the subject of an extensive five-year process that culminated with the passage by the Howard County government of the Downtown Columbia Plan in 2010, a guide to creating a vital area in which residents can live, shop, work, entertain, exercise, and enjoy cultural opportunities in an enriched natural setting. At full buildout, the redevelopment of Downtown Columbia will include three new and reconfigured neighborhoods—Merriweather District®, Lakefront District and Central District featuring more than 14 million square feet of residential, office, hotel, retail, cultural, and public uses including public parks, trails and more. Named #1 Small City in America by Money Magazine in 2016, Columbia has been named the #1 Safest City in America three years in a row by WalletHub.

About Ward Village ®
Being developed by The Howard Hughes Corporation®, Ward Village is a 60-acre coastal master planned community in the heart of Honolulu, located between downtown and Waikīkī in the Kaka'ako district. Honoring the distinct history of its land, Ward Village is at the forefront of sustainable community development, integrating significant architecture, local culture, and public space. New tree-lined sidewalks and bike lanes provide access to an over 100-acre public beach park, as well as the recently revitalized Kewalo Harbor. At full build-out, the development will include approximately one million square feet of unique retail experiences and thousands of homes in the community named "Master Planned Community of the Year" by the National Association of Home Builders and "Best Planned Community in the United States" by Architectural Digest. Ward Village is the first-ever LEED–ND Platinum certified master plan development in the country and the only one in Hawai'i, designed to feature public amenities at a scale not offered by any other urban development in the state. For more information, visit www.wardvillage.com.

About The Howard Hughes Corporation®
The Howard Hughes Corporation owns, manages, and develops commercial, residential, and mixed-use real estate throughout the U.S. Its award-winning assets include the country's preeminent portfolio of master planned communities, as well as operating properties and development opportunities including: the Seaport District in New York; Columbia, Maryland; The Woodlands ®, The Woodlands Hills®, and Bridgeland® in the Greater Houston, Texas area; Summerlin®, Las Vegas; and Ward Village ® in Honolulu, Hawai'i. The Howard Hughes Corporation's portfolio is strategically positioned to meet and accelerate development based on market demand, resulting in one of the strongest real estate platforms in the country. Dedicated to innovative placemaking, the company is recognized for its ongoing commitment to design excellence and to the cultural life of its communities. The Howard Hughes Corporation is traded on the New York Stock Exchange as HHC. For additional information, visit www.howardhughes.com .

Safe Harbor Statement
Statements made in this press release that are not historical facts, including statements accompanied by words such as "will," "believe," "expect," "enables," "realize", "plan," "intend," "assume," "transform" and other words of similar expression, are forward-looking statements within the meaning of the Private Securities Litigation Reform Act of 1995. These statements are based on management's expectations, estimates, assumptions, and projections as of the date of this release and are not guarantees of future performance. Actual results may differ materially from those expressed or implied in these statements. Factors that could cause actual results to differ materially are set forth as risk factors in The Howard Hughes Corporation's filings with the Securities and Exchange Commission, including its Quarterly and Annual Reports. The Howard Hughes Corporation cautions you not to place undue reliance on the forward-looking statements contained in this release. The Howard Hughes Corporation does not undertake any obligation to publicly update or revise any forward-looking statements to reflect future events, information or circumstances that arise after the date of this release. 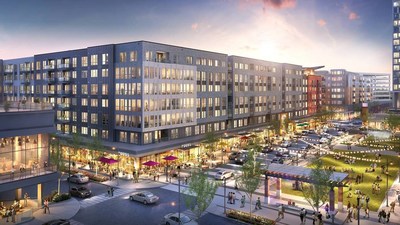 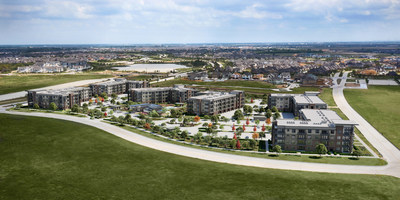